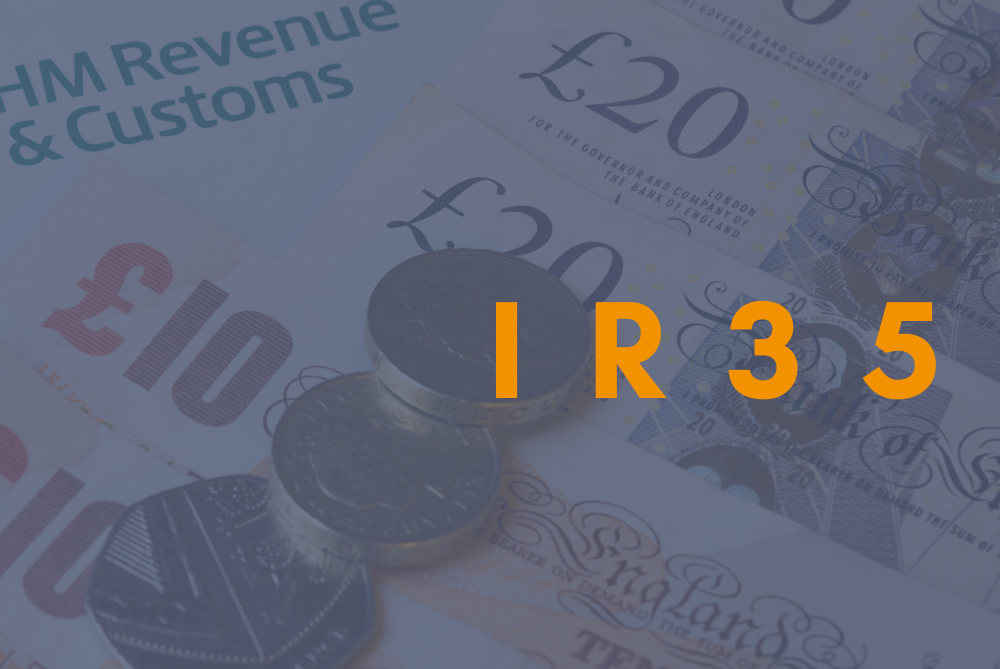 Moving on from IR35 irritation, to action

The off-payroll working rules – commonly known as IR35 – are intended to ensure that individuals who work like employees pay broadly the same employment taxes as employees, regardless of the structure they work through.  IR35 applies where an individual (the ‘worker’) provides their services through one or more intermediaries (usually limited companies), to another entity (the ‘end engager’).

IR35 was introduced in 2000, with workers (limited company contractors, otherwise known as personal service companies – PSCs) being responsible for making their own IR35 determination and paying their taxes accordingly.  In April 2017, the legislation was reformed for those working in the public sector, with the public authorities becoming responsible for deciding whether the worker would have been regarded as an employee for employment tax purposes if they were engaged directly.

In addition, if the worker was deemed to be working like an employee (‘inside IR35’), the entity which paid the worker’s PSC (the ‘Fee Payer’) became responsible for accounting for and paying income tax and NICs under PAYE to HMRC, on behalf of the worker.  This was regardless of whether the ‘Fee Payer’ was the public authority itself, or an agent.

As widely anticipated, the following year it was announced that this reform would be extended to engagements in the private sector[1] from 6th April 2020. Estimates of the number of individuals affected range from 170,000 to 900,000 UK-based limited company contractors.

[1] The one exception is ‘small’ companies, who will not be affected by the reform.

Our innovative delivery model relies on the fact that B2E consultants are not employees of our firm. As independent businesses, they carry the financial risk associated with not being chargeable to clients, allowing our fee rates to be lower than traditional, employee-based consulting firms

At odds with the future of work?

Issues with public sector reforms have been widely reported and included problems with the CEST (‘Check Employment Status for Tax’) determination tool and successful challenges to rulings. There was also a reported talent drain, with workers opting to seek alternative assignments in the private sector, negatively impacting transformation within the public sector.

In some ways it would seem a little incongruous that the government would seek to set obstacles in the path of the future of work. It seems a win-win direction of travel; for organisations that are keen to tap into ‘on demand’ workforces to stay agile and flexible in the midst of changing market demands [2] and for a professional workforce that is increasingly opting to freelance[3].

Perhaps the professional gig economy is a victim of its own success? With predictions ranging from the World Economic forum modelling that the majority of the US workforce will freelance by 2027 and other sources saying 42% of HR professionals plan to engage more contingent workers in the future, its clear to see why the HMRC may be spooked by the impact of this indisputable trend on its coffers.  Indeed it believes that less than 10% of PSCs actually complied with their responsibilities, and it estimates that the tax cost could be as much as £1.3bn in 2023/24 [4].

[2] According to Mercer’s latest Global Talent Trends study, 79% of executives expect that contingent and freelance workers will substantially replace full-time employees in the coming years.[3] The vast majority of independent consultants, 86% are satisfied with working as an independent, and are more satisfied than employed consultants with their current professional life.[4] Off-payroll working: How IR35 rules affect the private sector | Legal guidance | Tools | XpertHR.co.uk

From IRate to Action

Its clearly coherent policy for the government to want to identify ‘shielded employment’ and ensure that fair taxation is levied and we agree with this goal; but we also share the scepticism of many about the factors that HMRC believe make some engagements ‘employment -like’ given the financial risks independent consultants take on and wonder at the fairness of being deemed ‘employed’ for tax purposes but not for rights such as holiday and sick pay [5]

Whilst it is fair to say that there have been many shocks in our political landscape over the last year or so and there is lobbying to repeal this controversial reform; it’s now essential in our view that all the stakeholders in the ‘supply chain’ – consultants, clients and firms like ourselves look towards resolving the ongoing ambiguities together and are well into action-planning ahead of April.

As a consulting company we contract with our clients for the completion of project-specific activities and deliverables, i.e. contract for services, not for the provision of a specific person. In general, we engage with our clients through:

Given the nature of the work and the degree of control we have over full service and managed capability consulting projects, we expect the majority to fall ‘outside’ of IR35. However, we do anticipate that some of our interim consulting assignments will be deemed ‘inside’ of IR35 due to client policies or working practices and in these instances this will communicated at the outset and consultants will likely be asked to work through an umbrella company for this.

We welcome the recent HMRC briefing which refers to planned improvements to the CEST tool, now due for release in December 2019, but under current guidance, for an opportunity to be considered ‘outside IR35’, there are 3 main conditions, any of which would deem an engagement to be ‘outside’ of IR35:

There are other considerations including:

Ultimately each client will have a different approach that they will wish to take to IR35 depending on their risk profile and working practices. We are working with them and experts like Qdos to help bring our clients and our consultants more clarity over the coming months.

We foresee a large increase in the use of umbrella companies as a way to respond to this new legislation whilst complying with the new IR35 obligations. We anticipate that the trend towards more flexible working arrangements will continue despite the changes to IR35; clients will still want to maintain a mix of talent within their businesses and therefore demand for flexible talent options will remain.

Maninder joined B2E in 2015 and works with our clients and consultants as a Service Delivery Partner. She also leads the Business Analysis capability talent pool and B2E’s social media activities. Prior to this, Maninder spent nine years with Accenture within its UK Financial Services division, leading and supporting programme workstreams in Change Management, TOM Design, Organisation Design and HR Transformation.

Maninder joined B2E in 2015 and works with our clients and consultants as a Service Delivery Partner. She also leads the Business Analysis capability talent pool and B2E’s social media activities. Prior to this, Maninder spent nine years with Accenture within its UK Financial Services division, leading and supporting programme workstreams in Change Management, TOM Design, Organisation Design and HR Transformation.